Year-after-year, countless Women Builders go above and beyond to boost one another up and accomplish some pretty remarkable feats. We'll toast our Gatorade shots to that!

• Raising the bar. Year after year, we challenge the Women Build community with a new fundraising goal, and year after year, they continue to exceed our expectations. This year, we raised $10,000 over our $275,000 goal!
• Chicken dinner. Both Top Individual Builder and Top Team won by large margins at this year's Women Build. Lee O. brought home a whopping $9,100, almost $4,000 more than runner up. For teams, CREW Chicago raised a total of $23,441. Record breaking!

• Raise the roof. Our wonderful friends at Goose Island generously hosted our Women Build Appreciation party for all builders who raised over $750 each. Good food, good drink, good company – what more can you ask for?

• Women of the Week. Habitat Chicago's newest homebuyers came out to build their homes – all seven of them! Along with them, two Habitat homeowners came to show their support, celebrating their previous Women Build experience and their new lives as homeowners.

• In the spotlight. Anayeli Ruiz from NBC5 joined us at the construction site in West Pullman to highlight Women Build and Habitat Chicago's work in the area. Click below to watch: 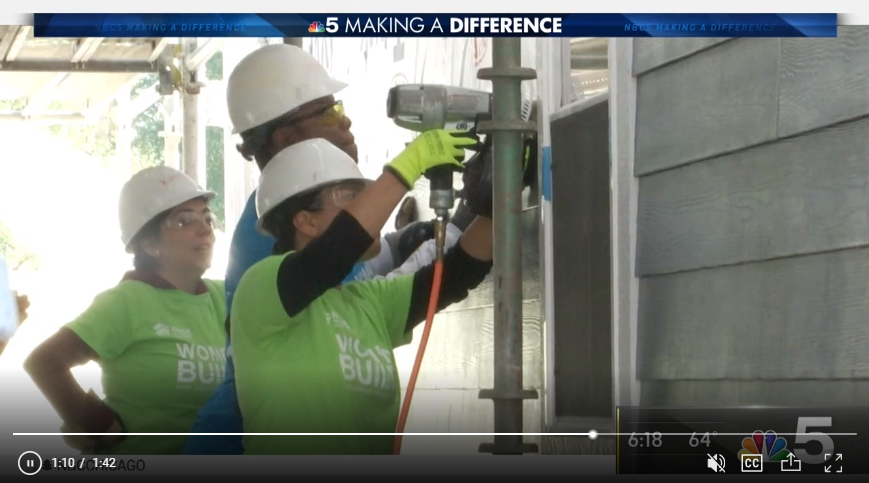 • No hurdle too high. In an especially difficult time for women, the Women Build community came together to raise over $242,000 - exceeding our shared goal by over $67,000!
• New champions. After countless changes on our Top Team and Top Individual Fundraiser leaderboards, Team Turner Construction claimed the crown of Top Team, dethroning Team Saville at the very last minute. Turner Construction's Team Leader Rebecca Cink simultaneously brought in over $5,000 to earn the honor of Top individual fundraiser.

• A Woman for all seasons. Women Build week 2018 delivered us all four seasons in five days, from 85 degrees and sunny to 30 and frigid. The weather was no match for our Women Builders, though, who powered through it all to raise walls (and walls and walls and more walls..) and break down barriers.

2017
• Showing of support. Women Build Homebuyer Darlene Duke emanated pure pride as she raised the first story walls of her home and helped construct her garage from start to finish, roof and all. Best of all, she did it alongside her daughters and three of her future neighbors.

• Crushing our goals. For the first time in Women Build history, we exceeded our fundraising goal, bringing in a whopping $163,762 to build  a safe, permanent home for Darlene.
• The reign of Team Shelby. After a tight race with nonstop lead changes, Team Shelby claimed the crown of top team for the second consecutive year. Between 2016 and 2017, these leading ladies raised over $40,000.

• Building in the rain. This video proves women will stand up and show up for one another, rain or shine:

2016
• Catherine G: a full-time powerhouse. Women Build Homebuyer Catherine G spent all five days on the construction site building her home with her own two hands while also pulling off a full 40-hour work week AND taking care of her young sons.

• Team Shelby claims the throne. At the beginning of the week, Catherine's future home was an empty foundation. By the end, the second story walls were up and we raised just under $150,000 to make it all happen, in no small part because of our top team Shelby's incredible efforts.

• Ain't no birthday like a build site birthday. Women Builders showed off their vocal range, singing Happy Birthday to Women Builder Ashley Dueringer who rang in her 17th birthday on the construction site. Fun fact: she did the same one year earlier for her sweet sixteen.

• The gang. Jeannie Gang and her team at Studio Gang Architects demonstrated proper usage of the high-five zones on-site and gave us all the gift of this hilarious awareness-raising video:

2015
• Carrying the weight of the walls. The number of wall sections our Women Builders constructed and then carried on their shoulders is too high to even count.  • Growth galore. The Women Build community brought in an awe-inspiring $145,376 - growing upon the previous year's already impressive work by over $30,000.

• Team CREW domination. CREW was the top team of 2015, bringing in over $13,000 and CREW team member Tammy K took home the title of top fundraiser (one she'd ultimately claim again in 2017).
• Good news. Jim Williams and his team at CBS Chicago came to the build site to capture and tell the Women Build story in this inspiring piece. 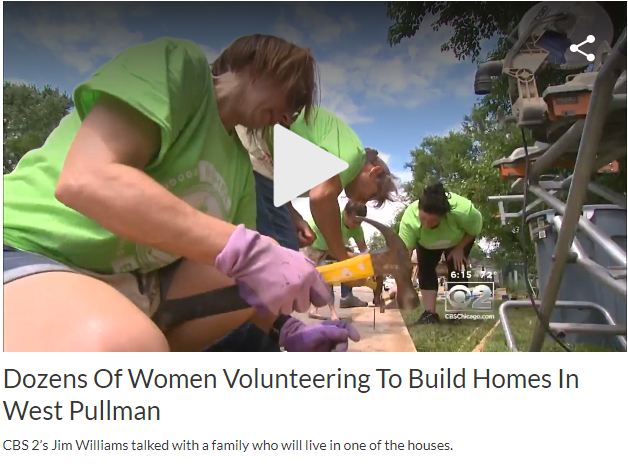 2014
• Women build homebuyers can do it all. Geraldine Robinson not only volunteered countless hours during Women Build to kick-off construction of her home, but she also took the time to bake cake for the ladies on-site. Less than a year later, after completing 250 volunteer hours and her homebuyer education courses, she claimed those hard-earned keys.

• Volunteers leading the way. 2014 marked the first year Women Build planning was led by an extraordinary, all-women volunteer committee. Their efforts catalyzed the Women Build community of 30 to raise just under $115,000, with the help of event sponsor Lowe's.

• Progress. These snapshots offer a beginning glimpse into the amazing progress our Women Builders made in just four short days:

2013
• Chicago Women Build is born. Our very first Women Build in Chicago brought 18 tremendous women together to raise $8,000 and complete a home repair project in West Pullman to set the stage for the years ahead.

• A great vision. Women Build 2013 was one of Habitat Chicago's very first opportunities to introduce volunteers to our vision in West Pullman.

• True and humble gratitude.  Women Build Repair Homeowner Ms. Terry captures what Women Build is all about in this note of thanks:
Have something you'd like added to the Hall of Fame? Let us know about it!