Inherently curious and brilliantly determined, Tonya Martin has been a happy, faithful Amtrak train attendant for over seven years. Her favorite routes to work on are those that head to California and Portland – routes with incomparable views through the Rockies and the Sierras. On these journeys, Tonya gets long layovers and has time to sightsee and adventure throughout the cities in which they stop.

Tonya rarely chooses to work this route, however, and instead travels primarily to Texas, a much less scenic journey. Why?  Because its travel schedule allows her to get home two days earlier to her five-year-old daughter, Kayli. And nothing, no grand trip or picturesque view, is more valuable to Tonya than the time she and Kayli spend together. It doesn’t quite matter what they are doing, from practicing the alphabet to visiting family on the weekends to taking selfies (Tonya lovingly refers to them as the “selfie-queens”), Tonya is happiest of all when she and Kayli are together.

And the more you get to know Tonya, the clearer it becomes that everything she does, she does because she wants her daughter to be happy. It is why she decided to become a homeowner in the first place.

“I wanted to move us out of our apartment for the longest time, but I was scared. As a single parent, I was worried about straining myself financially. But eventually I decided enough was enough. I've recently been trying to make a lot of changes in my life, for myself and Kayli."

It seems, though, that Tonya’s readiness pales in comparison to Kayli’s.

Although move-in is still a bit away and the volunteer hours and homeowner education courses can prove quite challenging, Tonya is truly relishing it all because of the new opportunities she knows are awaiting her at the end.

“It’s a new chapter for me and Kayli. I think we’re going to be very happy in our new house. And we’ll have a backyard. I never had a backyard and my daughter gets to have one.”

Kayli has big plans for their home herself. As pictured below, Kayli’s after a “rainbow” concept, and when we asked her if her mom would be on board with this, she uttered a cool, confident, “definitely.” 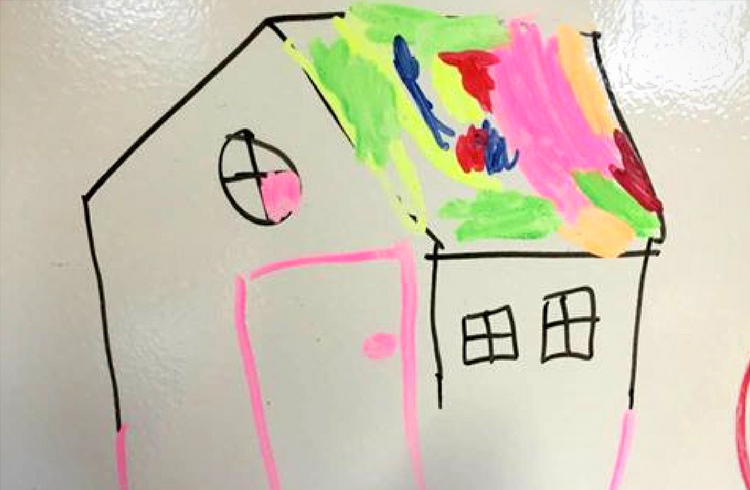 The Martins are just one of many Chicago families living in declining housing and neighborhood conditions. Learn more about how Habitat Chicago is working to create a city where everyone has the choice and opportunity to thrive.